Video in the Age of Coronavirus

Marketing to Engineers on Social Media in 2020

Things We Loved Learning from the Content Experience Report

How well aligned are marketing goals and marketer metrics? N...

Marketing to Engineers is a Funny Business

If you’re a fan of Digital Marketing For Engineers, you know it’s the mission of this blog to publish the most data rich and thorough examinations of marketing in the engineering world.

Lately, we’ve dropped some pretty heavy articles on you:

We need something funny.  We work in a quirky little corner of the B2B world, marketing products and services to some of the most highly intelligent, analytical, and marketingphobic people on the planet – engineers.

So lets have a little fun with our target personas.  Here are some of our favorite jokes about engineers and engineering.  Some are funny, some are actually funny, and some are just so bad they become funny.

1.  On The Importance of Civil Engineering

2. The Optimist, the Pessimist, and the Engineer

4. The Laws of Engineering

5. When Dad Jokes are Told by Electrical Engineers...

6. What Happens When a Physicist, an Engineer, and a Statistician Go Hunting?

An engineer, a statistician, and a physicist are out hunting. They spot a buck, and each take turn to try and bag it.

The physicist goes first. He pulls out his lab book and quickly calculates the trajectory of the bullet, assuming it is a perfect sphere in a vacuum. The bullet falls 20m short of the deer.

The engineer goes second. He pulls out his engineering pad and book of projectile assumptions. After a few minutes he’s ready. He takes aim and he fires. The bullet lands 20m passed the deer.

The statistician triumphantly leaps in the air shouting, “We got it!”

7. As Any Marketer Tasked With Going Over an Engineer’s Whitepaper Can Attest, That Grammar Clause Can be a Real $#%(^! 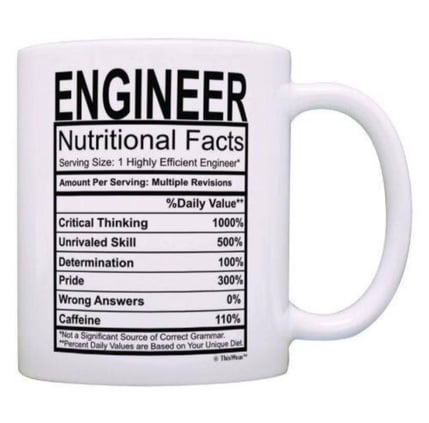 8. On How Engineers and Management Interaction

A man in a hot air balloon realized he was lost. He reduced altitude and spotted a woman below. He descended a bit more and shouted, “Excuse me, can you help me? I promised a friend I would meet him an hour ago, but I don’t know where I am.”

The woman below replied, “You’re in a hot air balloon hovering approximately 30 feet above the ground. You’re between 59 and 60 degrees north latitude and between 107 and 108 degrees west longitude.”

“You must be an engineer,” said the balloonist.

“Well,” answered the balloonist, “everything you told me is technically correct, but I’ve no idea what to make of your information, and the fact is I’m still lost. Frankly, you’ve not been much help at all. If anything, you’ve delayed my trip.”

The woman below responded, “You must be in Management.”

“I am,” replied the balloonist, “but how did you know?”

“Well,” said the woman, “you don’t know where you are or where you’re going. You have risen to where you are due to a large quantity of hot air. You made a promise, which you’ve no idea how to keep, and you expect people beneath you to solve your problems. The fact is you are in exactly the same position you were in before we met, but now, somehow, it’s my fault.”

Reaching the end of a job interview, the HR manager asked the young engineer fresh out of university, “And what starting salary were you looking for?”

The engineer said, “In the neighborhood of $100,000 a year, depending on the benefits package.”

The HR Manager said, “Well, what would you say to a package of $200,000 a year, 5 weeks of vacation, 14 paid holidays, full medical and dental, company matching retirement fund to 50% of salary and a company car leased every 2 years – say, a Mercedes?”

The engineer sat up straight and said, “Wow!!! Are you joking?”

And the HR Manager said, “Of course…but you started it.”

11. Bonus! But Hey, Sometimes It’s Our Fault for Asking Too Much From Our Subject Matter Experts…

Have a great 4th of July or whatever you celebrate! Thanks for reading,

<
Marketing to Engineers is a Funny Business Jun 28, 2018
<
What Survey Questions Would You Want to Ask Engineers About How They Consume Information? Jul 13, 2017
<
Using Machine Learning to Improve Email Marketing Success May 04, 2018

The Ultimate Guide to B2B SEO for Industrial Technology Marketing