Do I Need Marketing Automation? Here are the Signs...

The Power of Video Marketing - Why it Works

Do your marketing plans target younger engineers?  If so, this blog post will give you helpful insights into how they consume engineering information.

We analyzed the results of a new survey of 1,000+ engineers of all ages to find out how younger engineers behave differently from their older counterparts.

Younger engineers often do the research and specification for the decision makers, so they may well determine whether your solution makes it into consideration. That’s why many marketers choose to target early-career engineers in addition to their more seasoned counterparts.

In this blog post we’ll dig into five ways that the media habits of millennials differ from older engineers:

The research for this blog came from a survey of 1,000+ engineers conducted in the fall of 2016.  You can download a copy of the research report How Engineers Find Information.

Younger engineers grew up digitally and are more active on social media, but does that necessarily mean that they search for relevant engineering information this way? 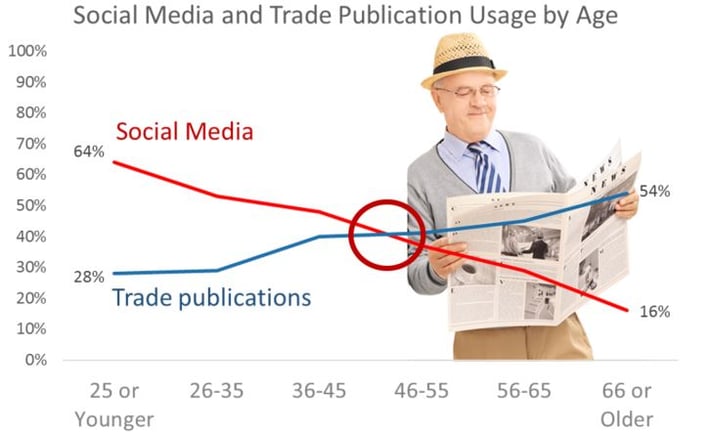 But let’s say you are trying to reach engineers in their prime decision making years of 46 – 65. Surely they don’t use social media, right? Well, our research shows that those engineers aged 46-55 are about equally likely to use social media as a trade magazine to gather engineering information. Only the group that is older than 55 showed a definite preference for printed magazines. If you are trying to reach retired engineers, those over 66 years of age, then print is clearly a better bet than social media.

According to Achinta Mitra, marketing engineer at Tiecas, “Younger engineers are usually tasked with doing the initial research and gathering information. If you don’t get on their radar at this stage of the buying journey, you may not make the final cut.”

Now, you could also look at these results and conclude that you need to advertise in print media to reach the older decision making engineers. It’s true that you will definitely reach some engineers that way. However, it would be a mistake to put all of your budget in print instead of in digital publications. Here’s why:

Engineers at every working age prefer digital sources of information

We asked these same engineers whether they had used digital publications as a source of engineering information in the past month. Note that these are publications, destinations like ENGINEERING.com, rather than other forms of digital media, such as online catalogs.

The most noteworthy takeaway for engineering marketers is that engineers of every age group reported a high usage of digital publications for gathering engineering information. Fully 74% - 82% of working age engineers reported using this media as a source, outpacing printed publications and social media for all age ranges in this group. 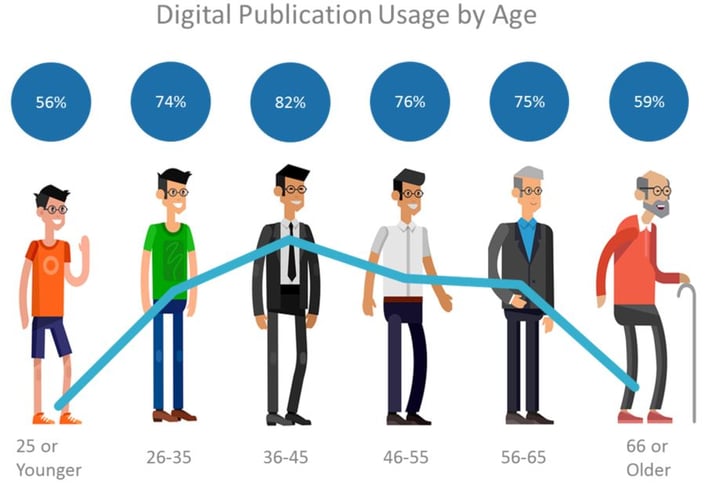 Young engineers are using smartphones (duh!) But so are their older peers

We asked engineers which devices they had used to access engineering news and information in the last month. The choices were: computer/laptop, smartphone, and/or a tablet. The following chart shows the results by age range. 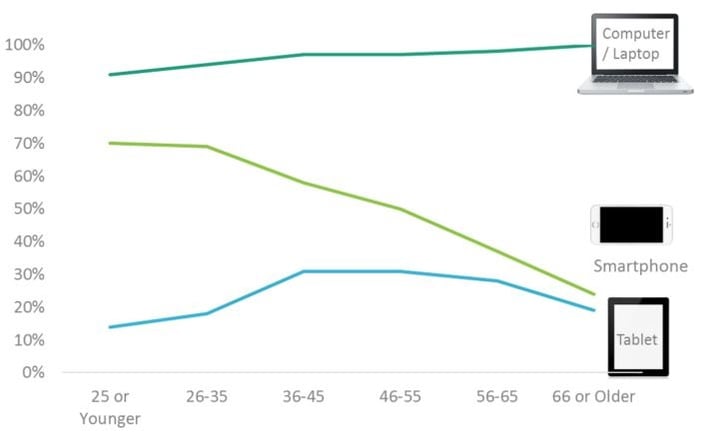 Note that engineers of all ages reported that the computer/laptop was their most commonly used device, while tablets were the least used. Smartphone usage was highest among the younger engineers and declined in a steady pattern for each older age group. Taken as a whole, 53% of engineers rely on their smartphone to source engineering information.

It’s likely then that younger engineers are consuming content outside the office, on their own time. Ensuring your content is mobile friendly is critical now, and will only become more important in the future.

I can’t overstate how big a deal it is that 53% of engineers use their smartphones to access engineering information. if your web site isn’t responsive to smaller screen sizes, you are missing a lot of visits. And if your content isn’t mobile friendly, again, you are missing a big opportunity. This is a problem that is only going to get worse.

Engineers of all ages like to receive engineering information by email

We asked engineers how they like to receive engineering information. Since marketers love to send email, particularly to hit their targets towards the end of the quarter, we asked about that specifically. The big news is that 97% of engineers will at least read the subject line of every email you send.

But how do engineers of different ages consider your email? We asked them whether they simply scan the subject lines and decide whether to read on or delete. Only 39% of younger engineers say that they treat email this way, whilst their older counterparts say that this is a more common behavior for them. 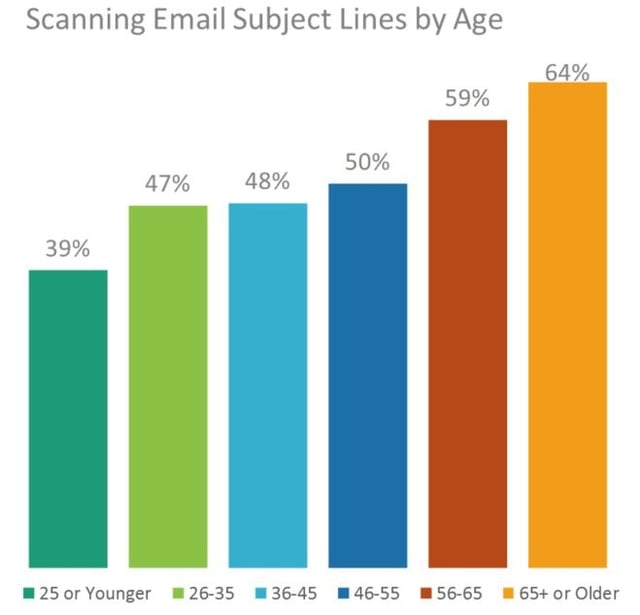 For older engineers, it seems that about half or more scan the subject lines before deciding what to do with an email. That means that all those email pundits who tell you to spend half your time writing a subject line, and to A/B test every one, are probably right. Since so many emails live or die by their subject lines, it is worth investing extra time in getting the subject line right.

But wait a second! I said that fully 97% of engineers consider email that you send, and this chart makes it look like no more than 64% scan the subject lines. That’s because there is another very popular way for engineers to deal with email, and that is to open every one and consider whether it has valuable information.

The following chart shows how many engineers take this path, by age group. Younger engineers are most likely to open every email and scan the top content before deciding how to act on the information. This presents an excellent opportunity to capture their attention with great content right from the outset. 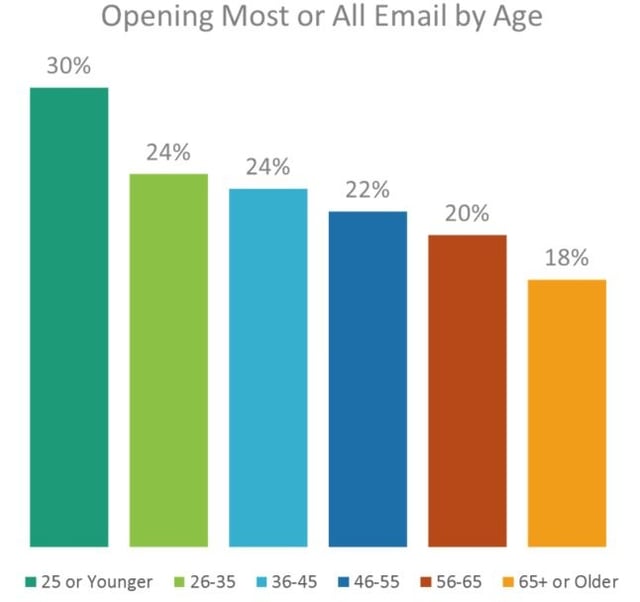 There are two big takeaways here. The first is that email is pretty popular – 97% said that they at least read the subject lines.

The second is that the content of your email really matters, and that the subject line matters most of all.

So, what if you are doing all this and your email campaigns are still not achieving great results? Well, there are those nasty spam filters that are getting more aggressive all the time. My new Outlook tool, called Clutter, seems to randomly remove all sorts of good emails just to have something to do.

So even if you are sending great emails, that doesn’t mean that your target prospects are receiving them. This may mean it is worth your while to experiment with new lists from time to time in an effort to expand your reach.

Now that we have entered an era of “post-truth” in politics, at least according to many news sources, you may think that those skeptical engineers are unlikely to believe anything you say about your products. Actually, that’s not the case.

First, let’s consider a recent research report by the Pew Research center. It says that 76-82% of respondents have some trust in news sources, but only 34% in social media. So if you are running out to post your campaigns on Facebook to reach millennials, consider that they may not believe you. Unless you are selling a diet that guarantees 6 pack abs.  Then they will believe you for sure. 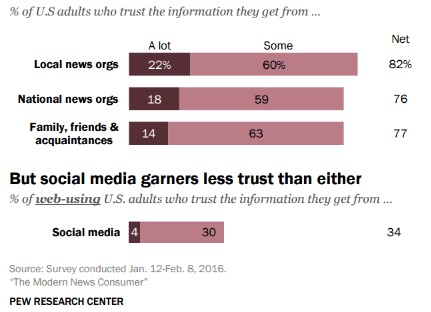 It may seem odd that younger engineers get information from social media, but that they don’t trust it. That can be explained by social media being such an ingrained habit that users are bound to see all sorts of content on social media, including engineering information. However, if you want your engineering story to be more credible, you may want to place it in a different medium, such as a digital publication. 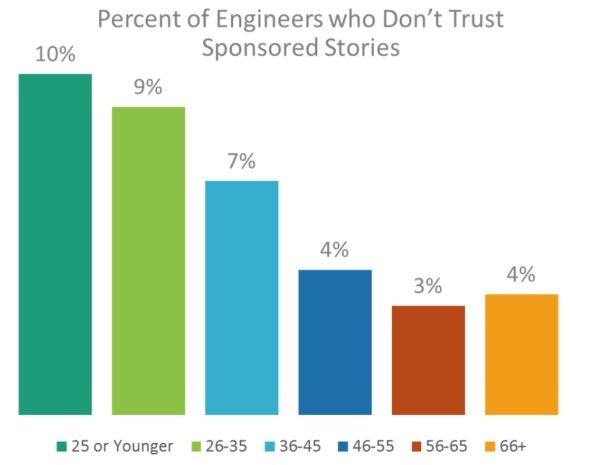 That small percentage shrinks even lower for older engineers, with only 3% of engineers aged 56-65 saying that they won’t read a sponsored story.  So, while younger engineers are much more likely to be skeptical of a sponsored post than their older counterparts, the more interesting finding is that engineers of all age consider sponsored content to be legit. That’s good news for marketers.

Before we go, here are the key takeaways from this research, which you can download here:

If you have read this far, thank you. I hope you will consider sharing this post with your colleagues. And please consider downloading your own copy of the research report How Engineers Find Information. It has a lot more information on the media habits of engineers.