Many technology marketers wonder whether they can use social media to reach engineers.

In this post we’ll review the research on how engineers use social media and how marketers are responding.

Here are a few key findings that can help technology marketers decide how much to invest into social media and which platforms are likely to deliver the best match.

Do engineers use social media for work?

In 2016, we surveyed over 1,000 engineers about their information habits, including social media. Approximately 40% said that they use social media as a source of engineering information.

The only problem - What does "source engineering information" actually mean?  I asked around the office and some of our engineering experts thought it meant downloading technical documents like white papers or spec sheets.  Others were more liberal with the definition and thought reading engineering news qualified.  While others were confused by the word "source" itself - does it mean only active search, and could it mean just being on social media while at the office?

Luckily, this wasn't the only source of data on social media use by engineers that we had access to.  An ENGINEERING.com study in 2015 was much more direct in asking about how engineers use social media at work.  It revealed that engineers routinely read work-related content that they find in their social media feeds. 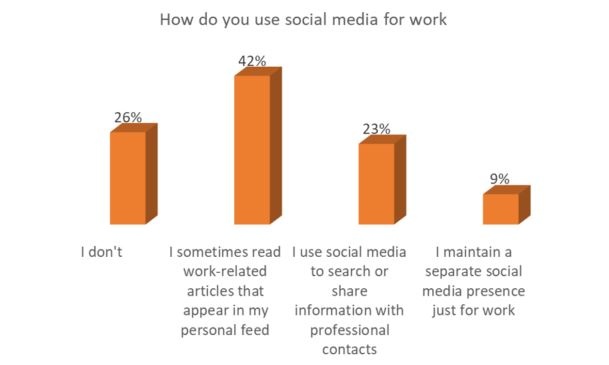 This research shows that only 26 percent of engineers reported not using social media for any work-related purpose. 32 percent (23 + 9) say that they actively use social media for work, and 42 percent report occasional use.

How does social media use vary by age of the engineer?

We wanted to know whether there was an age difference among engineers when it comes to their social media habits.  And there is.

The graph below shows the percentage of engineers who use social media and smart phones on the vertical axis and age groups along the horizontal axis. As you might expect, the red line shows that social media usage is highest amongst the youngest engineers and lowest for their older peers. 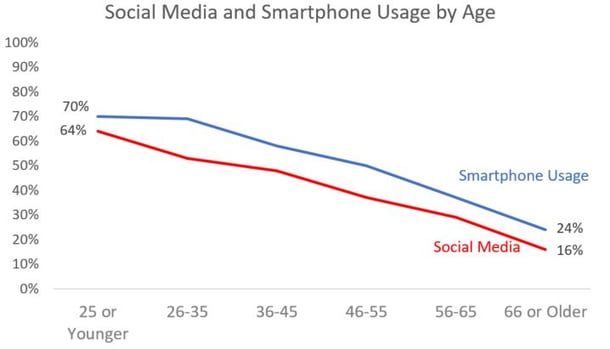 When you look at the red line, you can see that social media is used by more than half of engineers under the age of about 50 years. If you are running an awareness campaign to engineers in that age group, then social media can be a good fit. According to marketing expert Achinta Mitra, “Younger engineers are usually tasked with doing the initial research and gathering information. If you don’t get on their radar at this stage of the buying journey, you may not make the final cut.”

The blue line of the graph shows smartphone usage by age group. Smartphone usage shows a nearly identical pattern to social media usage. Social media tends to be something that engineers check when they have a few moments to fill. That often means using a smartphone, so that correlation makes sense. In case you weren’t already convinced, Facebook stated in their latest quarterly report that 90 percent of their daily active users are on mobile.

Like so many of us, engineers may grab a few minutes of social media time between other tasks, either during the work day or after work. In fact, the previously mentioned 2015 study found that engineers report heavy mobile device usage at all times of day, with the most popular time being during their commute, at 69% of all respondents. 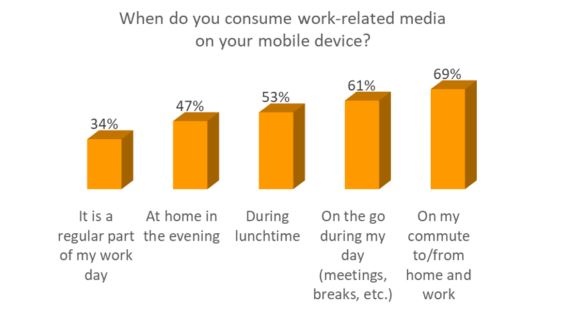 What I find to be the most striking finding from this chart however, is that it shows that engineers are using their mobile devices to consume work related content all day, although not just through social media.

Another study by IEEE Engineering360 surveyed over 800 technical professionals who work in industrial settings in late 2016. Their study found that their average technology respondents, including engineers, read “content or product/industry news on social media” somewhere between a few times per week to a few times per month. It seems that while not all engineers are looking for engineering news all the time that they are on social media, they are open to reading it when they see it. This may explain why so many marketers have invested in content marketing to reach those engineers.

“What kind of engineering information is best conveyed through social media?”, you might ask. The IEEE  survey revealed that 52 percent of engineers use social media to stay up-to-date on news about companies, products and technology.

This research suggests that if you want to generate awareness for a specific application of a product, then social media can help you get that message in front of engineers. We can confirm that from our experience at ENGINEERING.com. A significant portion of the traffic to our site is now generated through engineers sharing content with each other on social media, primarily Facebook and LinkedIn.

Many marketers report that social media is not as effective at lead generation as it is for awareness, and we have also found that to be true. Given the social nature of social media, there can be a disconnect if you use those platforms to try to obtain qualified leads. Worse yet is the challenge of generating leads from a smartphone user, who experience a disconnect between their device and the lead generation asset on offer, such as a white paper. And that doesn’t even consider the challenges of filling out a form on a small smartphone.

That’s not to say you can’t use Facebook or LinkedIn to gather contact information of engineers who may need some additional nurturing. We routinely use LinkedIn to make engineers aware of upcoming webinars, for example, and that works well.

How can a marketer reach engineers on social media?

Now that we know that engineers are using social media to consume engineering information, what can we do to make the most of our campaigns?

According to Shawn Fitzgerald of Thomasnet RPM, an industrial marketing agency, “For true opportunities, LinkedIn groups are still in a class of their own. This would be the area I would focus on heavily for marketing toward engineers on social media.”

That said, many engineering marketers find that while they like LinkedIn, they are having difficulty reaching engineers with an unpaid marketing campaign. One of the problems is that as a marketer, the groups you belong to are not the groups that you want to target. If you are a member of some groups for design engineers, your marketing posts are typically not very welcome. The paid campaign option is available, but it can be pricey on a cost per lead basis.

That also seems true of Facebook in 2017, as so little of your content will be shared unless you promote it as part of a paid campaign. There was a time when Facebook’s algorithms rewarded good shareable content by showing it to a lot of people at no charge, but those days are behind us now. If you do choose a paid option, Facebook has excellent targeting tools and a broad reach. If you are running an awareness campaign for engineers, I would definitely include at least a test on Facebook.

If you are like many industrial marketers you may be finding Twitter to be of limited use.  We have also found that the very nature of Twitter doesn’t readily lend itself to unpaid campaigns. We have had generally poor results from paid campaigns on Twitter and so don’t regularly use it.

In general, we’ve found that having a large social media following is useful, but not sufficient, to get the word out.  When we press “publish” on Facebook, for example, our stories will generate a number of views, and we will get our share of shares.  We see similar success for views and shares from LinkedIn, although we value that professional audience more highly in general. Twitter, LinkedIn, Reddit and Slideshare all have their place as well.  However, to truly maximize the reach of your content you'll need to have a strategy that goes beyond just social.

Social media is just one of several ways that we promote stories along with email newsletters, web presence, mobile apps etc.  We look at it this way – engineers have extremely fragmented consumption habits, and it’s our job as marketers to be everywhere they are, in any format they want. I’d suggest you consider doing the same or work with a media partner who has a presence across all digital channels.

Here are links to the studies referenced in this post in case you want to read further:

2016 Social Media Use in the Industrial Sector

Why are webinars so effective for engineering audiences?